A Year into the Pandemic: Anti-Asian Racism, Media Culture, and Racial Justice 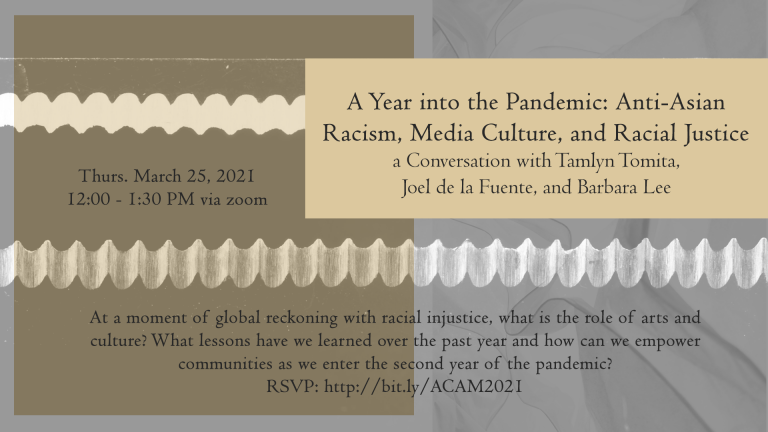 2020 saw an alarming rise in anti-Asian racism across North America as the COVID 19 pandemic revealed the persistence of systemic racism against Asian Canadian and American communities. At a moment of global reckoning with racial injustice, how can arts and culture contribute to anti-racism? What lessons have we learned over the past year and how can we empower communities as we enter the second year of the pandemic? To mark the International Day for the Elimination of Racism, ACAM will host an online conversation on anti-Asian racism, racial justice, and media culture between Tamlyn Tomita, Joel de la Fuente, Barbara Lee and UBC students. Tamlyn Tomita made her screen debut in a leading role in The Karate Kid Part II(1986). She has appeared in leading and supporting roles in films such as The Joy Luck Club (1993), Four Rooms (1995), and The Day After Tomorrow (2004). Her television credits include 24, Glee, Teen Wolf and How to Get Away with Murder. Tomita starred on the Epix drama series Berlin Station (2016), and in 2017 began starring in the ABC medical drama The Good Doctor. Joel de la Fuente is a New York-based actor who can be seen on two Emmy Award- winning original series: as Chief Inspector Takeshi Kido in Amazon Studio’s “The Man in the High Castle” and in “Hemlock Grove,” as Dr. Johann Pryce, on Netflix. Joel’s work on the Jeanne Sakata-written/Lisa Rothe-directed, “Hold These Truths” has spanned more than eight years. The highly acclaimed one-person play detailing the life of American hero Gordon Hirabayashi has performed in more than a dozen venues all over the country. Joel has also appeared in several productions with the National Asian American Theater Company and in 2005 served as its Artistic Associate, appearing in the World Premiere of “Cowboy v. Samurai” and in the title role of the critically acclaimed production of Chekhov’s “Ivanov.” Barbara Lee is the founder and president of the Vancouver Asian Film Festival. As a writer and independent filmmaker in Vancouver, she has worked as a broadcast journalist/reporter and received the national Radio and Television News Directors’ Association (RTNDA) Award for Best Editorial in 1998. Her film Between the Laughter was one of the National Film Board’s REELDIVERSITY 2004 winners which aired on CBC and PBS. Barbara continues to support North American Asian artists in mainstream media and is currently working on a music documentary about Asians in the music industry as well as finishing her horror screenplay.  Barbara leads VAFF’s Elimin8hate program, that includes a resource to report anti-Asian racism with project 1907 and consolidates public resources for community access while advocating for more representation in leadership roles.